A monastic friend of the Holy Monastery of the Prophet Moses offered this recipe for Prosphora, the Eastern Orthodox communion bread. Unlike western communion bread which is called azymes ( Greek – ἄζυμος or Hebrew מַצָּה maṣṣā ) Eastern Orthodox Churches deriving from New Testament Greek practice use a leavened bread. Traditionally the leavening comes from the surface of basil leaves that surround a cross placed on a tetrapod before the amvon for the feast of The Exhalation of the Holy Cross on September 14. Interestingly the natural leavening consists of yeast and sourdough bacteria though the resulting bread is not sour. A link to a video by the Puratos Group on the traditional religious method is here: https://www.youtube.com/watch?v=6TeYb-uod8Y

As seen in the video link above, Greeks traditionally take basil from the Exaltation of the Holy Cross, September 14. They immerse this in water, and add flour. By leaving this slurry of water and flour at room temperature, and refreshing it with more flour and water every twelve hours, after several days it will begin to bubble, and you will have sourdough starter.

The recipe below has references to a book with more detailed instructions on how to create your own starter. It is also possible to propagate a starter from known cultures sold as freeze dried packets. (See the link in the notes below.)

8:00 AM — Reactivate the Starter
Remove the starter from the refrigerator. To reactivate, stir the contents well. Pour out the starter, retaining a one inch layer in the bottom of the jar. Discard the rest. Add 1 cup flour and 3/4 cup warm water. Stir well. It will have the consistency of pancake batter. Close the lid, but leave it loose. The starter may overflow the top of the jar. Place on a shelf and leave for 12 hours.

8:00 PM — Make the Leaven
Measure out 600 grams warm water in a stainless steel bowl. Add three tablespoons of the reactivated starter. Stir well until completely dissolved. Add flour equal in volume to the 600 grams of water. Stir well. Cover and leave on a shelf for 12 hours. Sift 3000 grams flour (yellow durum flour from Greece is ideal) and place in a bowl. Cover and leave overnight. Place one tablespoon pure sea salt in 500 grams water and leave to dissolve overnight.

Reactivate and Return the Starter to the Refrigerator
Reactivate the starter as above. Stir the contents well. Pour out the starter, retain- ing a one inch layer in the bottom of the jar. Discard the rest. Add 1 cup flour and 3/4 cup warm water. Stir well. Close the lid, but leave it loose. Allow the starter to reactivate for one hour, then close the lid tightly and return it to the refrigerator for another week.

8:00 AM — Making the Prosphora
Place the 3000 grams flour in mixer. Add the one tablespoon pure sea salt dissolved in 500 grams water. Add 400 grams warm water to the leaven and stir well. Pour the mixture of leaven and water into the bread mixer, and mix for twenty minutes. Slowly add water 50 grams at a time until the dough becomes a cohesive mass, but remains firm enough to take a crisp impression from the seal. After twenty minutes, the dough will have pulled away from the sides of the mixing bowl.

Remove the dough from the mixer and place in a bowl. Cover and let the dough rest for half an hour. During this time, take seven 8 inch pans. Rub lightly with olive oil, and coat with flour, to prevent the dough from sticking to the pans when the loaves are baked. 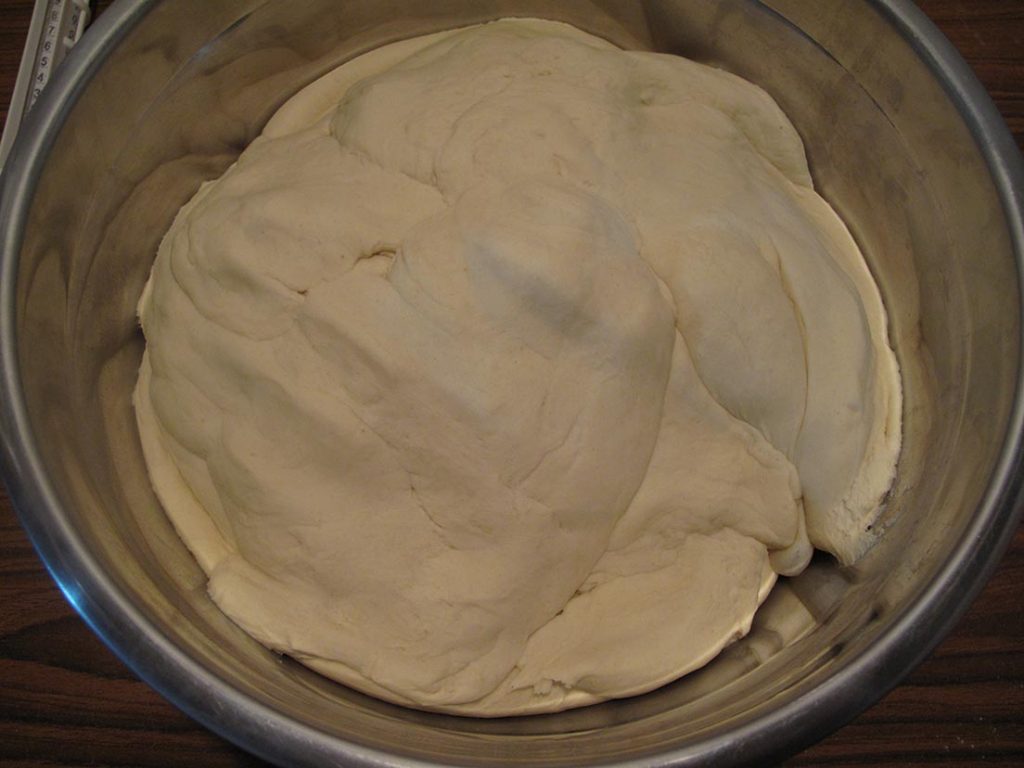 Allow the dough to rest in a covered bowl for 30 minutes.

Weigh the dough and calculate the weight of seven equal portions. With the dough scraper and scale, cut the first portion. Press it out thoroughly to remove any large bubbles that may have formed. Use the dough scraper to collect the dough into one mass, and shape it into a ball. Turn the ball in increments, gradually pressing the sides of the dough into the center base. This will create a ball of dough with a smooth outer surface. Use a rolling pin to gently flatten the dough until it is the same diameter as the pan in which it will be baked. Place the dough into the pan, and gently press it down to ensure that it is even. Repeat for the other six loaves.

Press the seal gently but firmly onto each loaf. The seal should go down about 1/2 centimeter (1/4 of an inch). Take care that the seal is even. Remove slowly, allowing the dough to pull away from the seal. The impression should be crisp and smooth.

With a skewer, make holes all the way through the loaf just outside the four corners of the centre square, and make additional holes around the perimeter. Repeat for all the loaves.

Place on a shelf and cover, and allow the loaves to rise. It is best to have the loaves at 27 degrees Celsius (80 degrees Fahrenheit). They will rise slowly until doubled in size. Be patient.

Remove the prosphora from the pans and place them on wire racks to cool. Cover with towels. In the evening, transfer the cool prosphora to plastic food storage boxes, to soften the crust. The next morning, wrap each one with cling film.

It is possible to create a natural yeast (‘sourdough’) starter on your own. Directions are given in, for example, Tartine Bread, by Chad Robertson, pages 45-46. It is also possible to purchase a known and predictable culture for creating a starter. Many are available from Sourdoughs International.
http://www.sourdo.com/our-sourdough-cultures-2/

In Greece, it is easy to find Αλεύρι Κίτρινο, ‘Yellow Flour’. This is made from durum wheat (από σκληρό σιτάρι), and has a characteristic yellow color and rich flavor. Flour made from durum wheat is high in protein but lower in gluten, which makes for a more controlled rising and baking. Durum flour is also avail- able in the United States, from King Arthur Flour, among others. The balance of flour and water is critical. There must be enough water to cre- ate a pliable dough, but it should remain firm enough to take a crisp impression from the prosphora seal. The total amount of water will depend on the flour. With the right proportions of flour and water, the dough can be shaped on a formica table top with the help of a dough scraper. There is no need to dust the table with flour, which would dry the dough. The easiest way to avoid the dough sticking to the pans is to coat them with a little oil, and dust them with flour. Some prefer to coat the pans with melted bees- wax. It is also possible to use teflon coated pans, or parchment paper. Be patient and allow the loaves to rise until they have doubled in size before they are baked.

The following is a note from the Sourdo.com website about their product:

In 1997 we acquired the authentic San Francisco culture with the wild yeast now classified as Candida humilis and with the bacteria classified as Lactobacillus sanfrancisco. We guarantee this culture contains these organisms as the dominate organisms of the culture. The two organisms have a symbiotic relationship that has helped them survive for over a century. The Lactobacilli require maltose, a nutrient in the flour, for growth. The wild yeast doesn’t use it so together they thrive very well. By comparison most commercial yeasts do utilize maltose and thus are in direct competition with the lactobacilli which is another good reason not to use commercial yeasts.

Friends of the Holy Monastery of the Prophet Moses